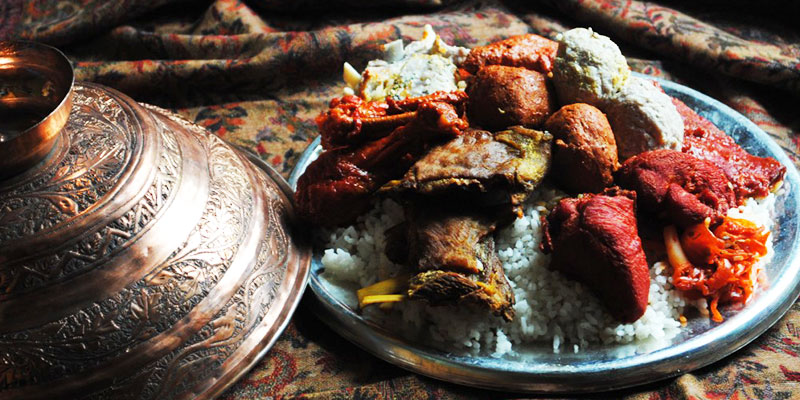 The Valley of Kashmir located on the northernmost part of India needs no introduction on its serene beauty, snow-capped mountains, crystal clear glaciated lakes, and tranquil meadows. It is regarded as a crown jewel of India which is also famous for its rich cuisines which date back to several centuries.

Rice and meat have been a staple and most popular food in Kashmir through ancient times and they continue to consume voraciously to this day. Kashmir cooking emphasis on lightly prepared dishes with strong aromatic spices, it demonstrates intricacy, attention to detail, the texture of meat, colour, taste, and use of ingredients with good flavour. The cuisines of Kashmir are akin to its serene beauty but a majority of its cuisines are unperceived, foodies will find the cuisines delightful and their taste indelible. Kashmiri cuisines are dominated by non-vegetarian dishes but a lot of vegetarian dishes are prominent too.

The pride or the crown of Kashmiri cuisines is the “Kashmiri Wazwan” ranging from 7 to 36 different dishes (veg & non-veg), it is a multi-course meal and its preparation considered an art, which prides in their culture and identity, served on special occasions like festivals, functions, and marriage ceremonies. You would also come across many hotels and restaurants in the region which serve the famed dishes. Wazwan is prepared by all sects who reside in Kashmir which includes Kashmiri Muslims, Pandits, Gujjars, Dards, and Pashtoons. A professional chef who cooks wazwan is called as “Waza” and head chef as “Wast Waza”. The word wazwan is a set of two words waza+ wan. Waza stands for cook and wan for a shop. Wazwaan in itself is a combination of different art forms, where a waza or cook prepares the cuisines in a delicate way, grinds the boneless mutton on carved stone and adding spices in a fascinating way and with a lot of love and patience prepares the ambrosial and appetizing cuisine of the world.

The history of wazan dates to several centuries and one would come across various theories regarding the commencement of wazwan in Kashmir, the most widely accepted theory is that the recipes of wazwan came with the onset of Sufi preachers and travellers who came from Central Asia and Persia. One would come across several dishes similar between Persian & Kashmiri cuisines even today “qorma”, “kebabs” and “aab gosh” have similarities.

Wazwan is cooked in copper utensils (degg in Kashmiri) over simmering fire of wood of old trees, Kashmiri wazwan is served on large copper plates (trami in Kashmiri) to a group of 4 persons in a definite sequence, beginning with a ritual of hand washing with a jug and basin (tash t nari in Kashmiri)

Bedecked on cooked rice “trami” is decorated with below-given dishes with a sprinkle of green coriander leaves and dry fruits like almonds and cashews:

(I)”Methh”: made from dried fenugreek leaves and lamb intestines with spices like cardamom, cinnamon, pepper etc and placed on 4 spots over (trami)

(II) “Kabab”: it needs no introduction as it’s widely popular all over the world but the Kashmiri one has some extra ingredients like egg white, meshed seeds of black cardamom and red chilli powder. There are usually 2 kababs present over a trami.

(V) “tabakh maaz”: two long pieces of ribcage meat are fried in ghee in a wide utensil that gives it a crispy taste.

While in marriage ceremonies and other functions, once the patrons finish eating or dividing the above dishes, then comes to the waza wearing a white dress and holding a round utensil in his hand and begins to deliver the remaining cuisines one by one. (VI) “rista”: these are round meatballs made from freshly slaughtered lamb with some raw mutton fat and spices like salt and black cardamom seeds.

(VII) “rogan josh”: having intense red colour this dish is prepared from the broth of cockscomb (mawwal in Kashmiri) giving it red color.four pieces of mutton are served to each trami.

(VIII) “daniwal korma”: “daniwal” means coriander in Kashmiri. This cuisine has a thick gravy made with yoghurt and with the aroma of coriander leaves. Usually, four pieces are served.

(IX) “marchhwangann korma”: This is the hottest food in wazwan. Made with red chillies soaked in water overnight. Taste of this dish will leave its effect for a very long time.

(X) “aab gosh”: Made without any spice, aab gosh is truly like its name “aab” meaning water, which is simple cuisine have ingredients like milk and green cardamom.

(XI) “waza palak”: palak as every Indian knows means spinach but “waza palak” is loaded with ghee and sometimes has small meatballs in it.

(XII) “tamatar chaamann”: this is the first vegetarian dish of wazwan. Tamatar means tomato and chaamann means cheese. A large cheese piece enough for 4 people is served to each trami having a thick gravy of tomatoes and spices like fennel and chillies.

(XIII)”Du piyaz”: this is an improvised type of vegetarian “do piyaz” meaning two onions. Cooked with a large amount of onions in two stages with curry and spices. wazwan style “du piyaz” has mutton pieces in it.

(XIV) “lahabi kabab”: A diamond-shaped pounded meat softer and more delicious than barbeque kabab having yoghurt and some extra spices as its ingredients.

(XV) mushroom: a second veggie dish in wazwan with a little spicy gravy.

(XVI) “dodhe rass”: its a milky and sweet tasting cuisine made entirely with milk without any spice. (“dodhe” means milk “rass” meaning gravy in Kashmiri). A large piece is served to each trami.

(XVII) “haakh”: third veggie dish. haakh means lettuce locally and is the most loved dish in the entire valley. Its like state dish of Kashmir. It’s a purely vegetarian dish cooked in mustard oil with few spices.

(XVIII) “Pulaw”: fourth veg dish. Served in a tightly packed box for a trami. Kashmiri pulao is sweet basmati rice dish having almost every dry fruit and with an aroma of (“kong” in Kashmiri) kesar (saffron).

(XIX) “boteh chear”: fifth veg dish.boteh chear means apricot of Ladakh, this is a newly added dish to wazwan which was not visible until the 21st century.

(XXII) “Gushtaba”: marking the end of wazwan, “gushtaba” is a single large meatball (bigger in size than rista) prepared by the pounded lamb boneless meat in a gravy of yoghurt and spices called as “yakhni” is the last cuisine of wazwan. In between serving wazwan, a tray containing veg pickle, salad and Muji chutney is distributed.

Wazwan despite being the apex set of cuisines in Kashmir. It has evolved and transformed through various eras. Several new dishes got added to it in the 21st century and the people across all diversities are finding these changes congenial. One who tries wazwan for the first time will eventually crave for more and the flavour will remain on your tasting buds for a very long time.