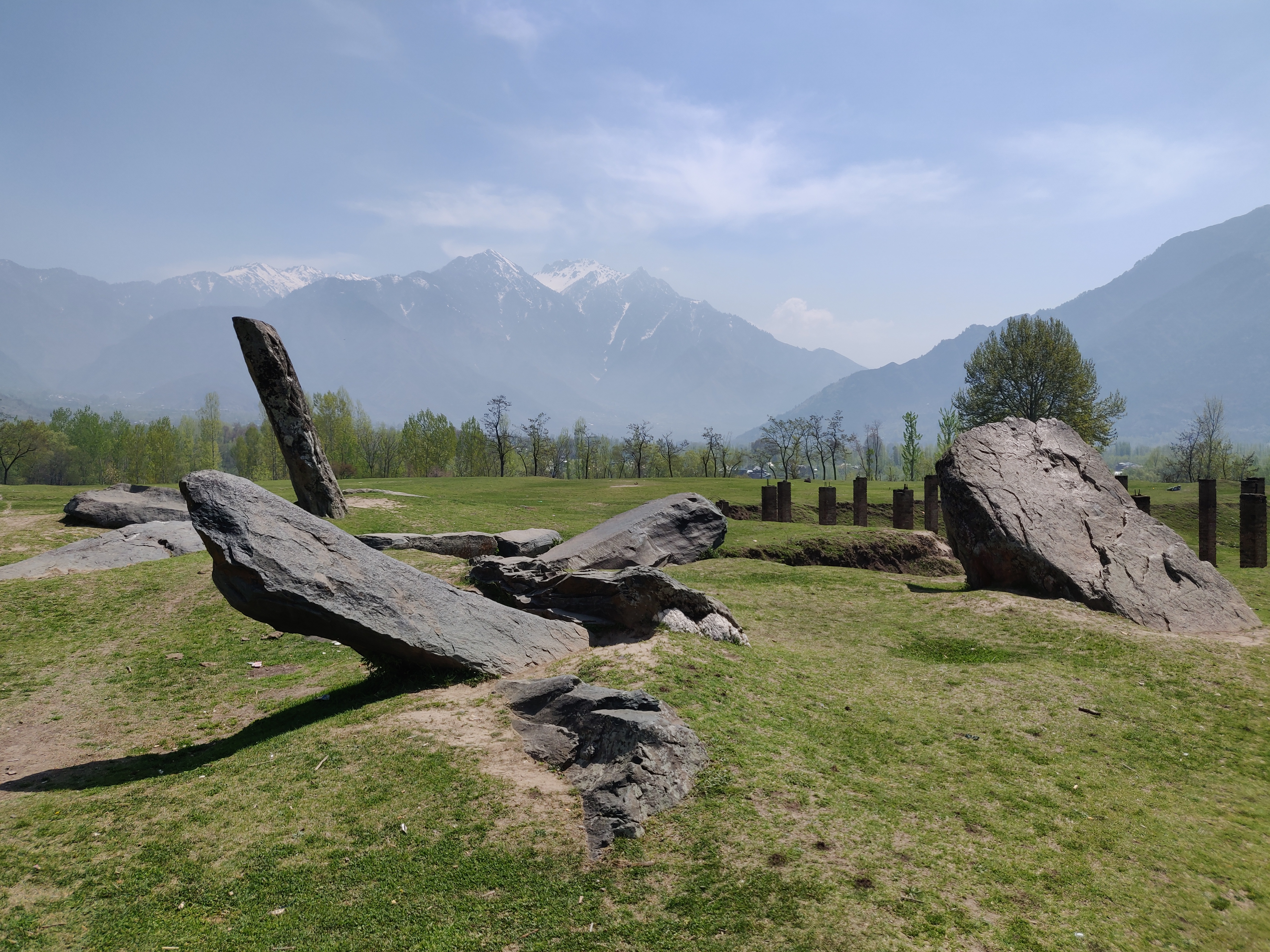 What comes to your mind when you think of magnificent Kashmir Valley? Of course! Lofty mountains covered in haze of clouds and snow adding to their beauty like a dreamy world, crystal clear water rivers, rich variety of flora and fauna, and lush green forests spread far and wide etc. there is no doubt that Kashmir is considered no less than a heaven because of all the given reasons and variety of things which are still unexplored. Burzahom Ruins is one such site in the serene Kashmir valley that is not much travelled but has a lot to tell about.

Burzahom Ruins is a historic site in proximity to the capital city, Srinagar. It is situated at the elevation of 1800 metres from the sea level near Pleistocene lake. The site provides a stunning view of the majestic Dal Lake located at the stone throw distance of 2km. In Kashmiri dialect “Burzahom” means “Birch”, which is a species of tree that grows in the Himalayan region at the elevation ranging from 3000 to 4000 metres. This species of tree is found in the housing area of the excavated site growing as a material for roofing, henceforth; proving that these trees existed in prehistoric times as well. Burzahom ruins were discovered during an expedition post which several excavations have been implemented over a time, which exposed different phases of its significance and culture from 3000 BC and 1000 BC. The research revealed some human activities in Kashmir during the prehistoric era along with the presence of the ancient flora and fauna. While pottery, stone made tools, mud houses, skeletons and dwelling pits are some of the other inclusions that were found in an excavation.

Interestingly, Burzahom Ruins were discovered as an accident when Helmut de Terra in the year 1936 started with a geological tour. One day when he decided to take an excursion tour of Jhelum river, he noticed something strange evolving from the river bank, out of curiosity, he went near it and found a stone knife produced from volcanic rock and this marked the first turning point from the discovery point of view in the valley that leads to in-depth research. In fact, it was an indication of the presence of early humans in the Himalayan region. The phases of a cultural shift in Burzahom had four eras. Period I and Period II are known as the Neolithic era, Period III as the Megalithic era and Period IV represent the early historic era.

The most striking findings during this era were dwelling units or pits that were made in oval or round shape dug deep into natural Karewa soil. A couple of these pits were detailed with steps and ladder to provide access till the bottom, and in some of these pits charcoal layers and ashes were found that confirmed that these pits were used by humans as shelters.

During this era, a gradual change in lifestyle was seen as the people opted for ground levelled shelters rather than pits whereas, the pits and the chambers associated with these new shelters formed the foundation.

This era represents the period of large stones of various shapes, size, height and weight. These massive stones or boulders were formed due to variations in temperature and were brought down by the people with great difficulty to be installed to notify events related to their community.

This era marked the last stage of the human existence in Burzahom from 3rd to 4th century. The mud structures which were built during this period were exceptionally superior as compared to the previous ones. Besides, some pottery, the wheel turned and iron antiques were also found.

Burzahom Ruins have established its spot in the listing of UNESCO World Heritage Sites, and soon it will be declared as one of them. Besides, it’s been confirmed as an Ancient Monument by the Archeological Survey of India. It is believed that men of Burzahom were sharp hunters and skilled craftsmen due to a wide range of pottery and tools they used. A shift can be witnessed in a way that how this civilisation evolved from tool making to tool implementation and from hunting to agriculture. A tool like harpoons, antlers, bones, needles, spears, stone axes, daggers, arrows, ponders and scrapers etc. can be seen. Apart from these tools, paintings and pottery can also be seen. The people of Burzahom can be given credit for forming the sky chart. In one of the stone carvings, two hunters carrying spheres to hunt a stag under the shine of twin suns can be seen. Although, the engraving shows that hunting was one of the prime occupations of that era, however; it is still unclear to historians that why there are two suns carved on stone, the history behind this is still under investigation. However, some of the historians believe that the image of two suns refers to the hunt duration.

Apart from creativity, pottery and scores of other inventions, the Burzahom men were also quite ahead in medicine. This evidence was collected after finding a skull of a woman buried at the site that had multiple trepanation. The skull of a woman has many completed perforations resulted from numerous attempts to consecutive sittings. However, scientists are still unaware whether this act was done due to some medical reason or for the purpose of ceremonial offerings.

But, one thing which is absolutely clear from this evidence is that during the prehistoric era, migration of people used to happen across the globe as such similar trepanations were also found in ancient societies of Africa, Harappa, Peru and Europe etc. Additionally, from the skeletal remains of the people of Burzahom, it can be found that they were similar to the people of Indus Valley Civilization. However, nothing can be said about the presence of Aryans in Kashmir Valley, which still remains a controversy amongst the historians.

But according to one of the retired IAS officers and former director of mountain tourism in Kashmir, there are numerous theories about “How did origin of Kashmiris begin”?which is considered as one of the most mysterious and interesting topics amongst historians. Some believe that Kashmiris came from Central Asia and were descendants of Aryans, some believe that Kashmiris were part of the lost tribes from Israel, who came here via Afghan and Iran. But, as per the former director of mountain tourism it is believed that the only proof about the commencement of civilisation in Kashmir is Burzahom Ruins!